Los Angeles International Airport, universally known as LAX, is the fourth-biggest airport by passenger count in the world. In 2018, LAX accommodated 87.5 million people. Often it seems that all of them are stuck in traffic in the airport oval or in the hapless surrounding neighborhoods. Constant congestion and construction are key reasons LAX ranked second from last (again) on J.D. Power’s recent North American airport survey, surpassing only Newark in passenger satisfaction.

On October 29, LAX is taking a dramatic step that airport officials insist will cut traffic. On that day, taxis and rideshare vehicles like Uber and Lyft will be banned from making curbside passengers pick-ups. (Uber, Lyft, taxi, limo and private car drop-offs will still be permuted.)

Instead a dedicated lane has been created for shuttle buses on the lower (arrivals) level. The free shuttle will take passengers to a new pick-up lot, dubbed “LAX-it.” Here, the taxi or ride-share they booked after picking up their baggage is supposed to be waiting. LAX-it will include amenities like food trucks and toilets, a welcome change from my long-ago days as a cabdriver penned like an animal in the JFK waiting lot.

The shuttles are supposed to arrive every three to five minutes during peak hours. Airport officials promise the buses will not compete with other airport traffic and will make a maximum of 2 stops before heading to LAX-it. LAX staff will be available at each shuttle stop to help with questions and even luggage loading, according to spokesmen. And if you don’t want to wait for the bus, or if you’d like to stretch your legs after an 11-hour flight, you’re welcome to walk to LAX-it. The lot, adjacent to Terminal One, is said to be a twenty-minute walk or less from any terminal.

Passengers may view the end of curbside pickup quite differently. Instead of an Uber theoretically waiting at the curb after being summoned from baggage claim, passengers will need to wait five minutes for a bus. It may then take fifteen minutes for the bus to deliver passengers to the LAX-it lot. There, they and their luggage will disembark and re-embark in their taxi or ride share.

“It’s inconvenient,” traveler Mary Cate Haley, 28, told the LA Times. “I get why they would do that, but that’s the last thing I want to do: get off a plane, then go down and take a shuttle.”

Airport spokespeople insist that what seems like adding another twenty minutes to the trip is actually an illusion. “The Central Terminal is horrible at certain times of the day, and it can take an hour to get out of the airport,” says Keith Wilschetz, Deputy Executive Director for Operations and Emergency Management. 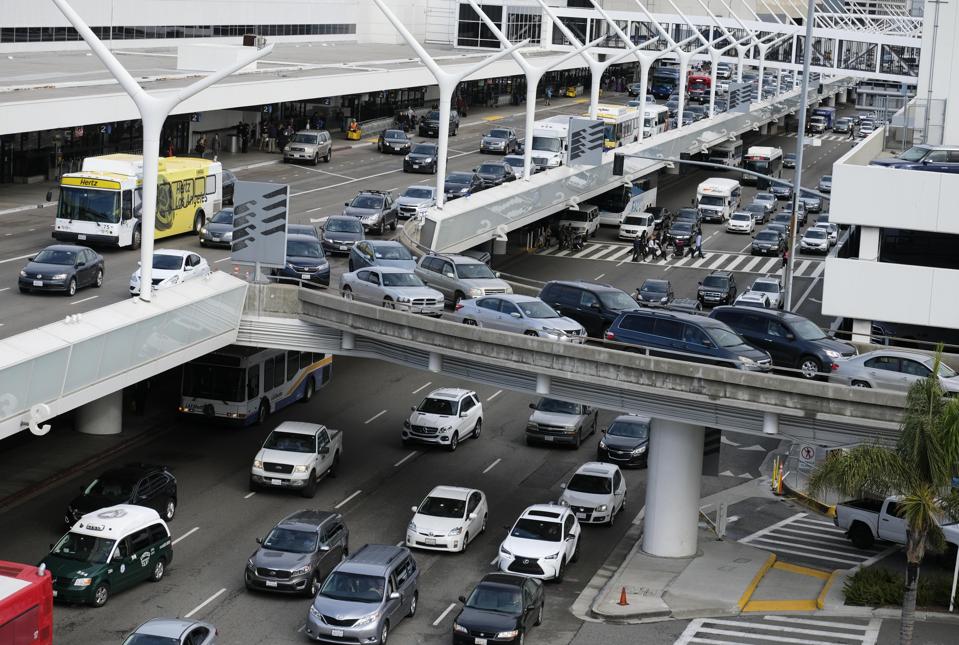 Instead, “the shuttle system will be incredibly efficient and reliable.” He says it can handle a pair of A380s landing at the Bradley Terminal with a total of 700 passengers. The buses will stop only at Bradley, then go directly to the LAX-it lot for rideshare pickup.

How do the ride-share giants feel about the new system at the second-most visited airport in the US? “We have been working closely with the LAX airport leadership and we look forward to continued collaboration with the Airport leadership on how to best reduce terminal congestion, lessen wait times for drivers and riders, and provide the best possible pick up and drop off experience for all Lyft users,” said a Lyft spokesperson.

Uber, however, was not as sanguine. “While we have concerns with aspects of LAX’s plan to move all rideshare pickups to a staging lot, we have shared those concerns directly with LAWA and will continue operating at the airport. In the meantime, we hope LAX will listen to and incorporate our input so that LAX passengers can continue to access rideshare service in a seamless way,” a spokesperson wrote.

Uber also shared a letter from Uber Global Security to an LAX airport operations manager, noting concerns in terms of operations, rider experience, driver experience, and contingency planning. In particular, Uber is concerned about limited ingress and egress, and the size of the LAX-it lot.

“Uber has been allocated 37 stalls for pickups. Uber alone sees nearly 500 pickups per hour on average. During regular peak periods, we see over 1,000.” Meanwhile, “We anticipate roadways between the driver staging area on 96th Street and the LAX-it lot will become highly congested.”

Such issues, the company warns, carries the risk of “long wait times due to insufficient lot capacity.” The company also warns that passengers may try to flee the airport on foot and hail vehicles on the sidewalk outside, creating traffic hazards….Read more>>