Wells Fargo & Company expects to refund some customers for monthly account service fees due to “confusion” over how to qualify to have the fees waived, the company said in a recent Securities and Exchange Commission filing.

The bank hasn’t disclosed how many customers might be affected by the issue or how much money is on the line, but the company mentioned the potential refunds as one way it was looking to rebuild customer trust after a series of embarrassing and costly scandals.

Rep. Katie Porter, D-Calif., publicly shared a letter to Wells Fargo CEO Charles Scharf this week asking the company to share the extent of the service fee problem, writing that the bank may have collected “hundreds of millions of dollars” in service fees on its popular Everyday Checking and Opportunity Checking accounts.

Porter referred to an earlier Capitol Forum article that reported refunds may be owed to millions of customers.

“Refunding these and any additional funds that the bank at any point improperly collected is a necessary step in regaining public trust,” she wrote. “Before Wells Fargo can in good faith begin any new initiatives or public relations campaigns related to its image restoration, it must take concrete action to address and resolve its many past mistakes.” 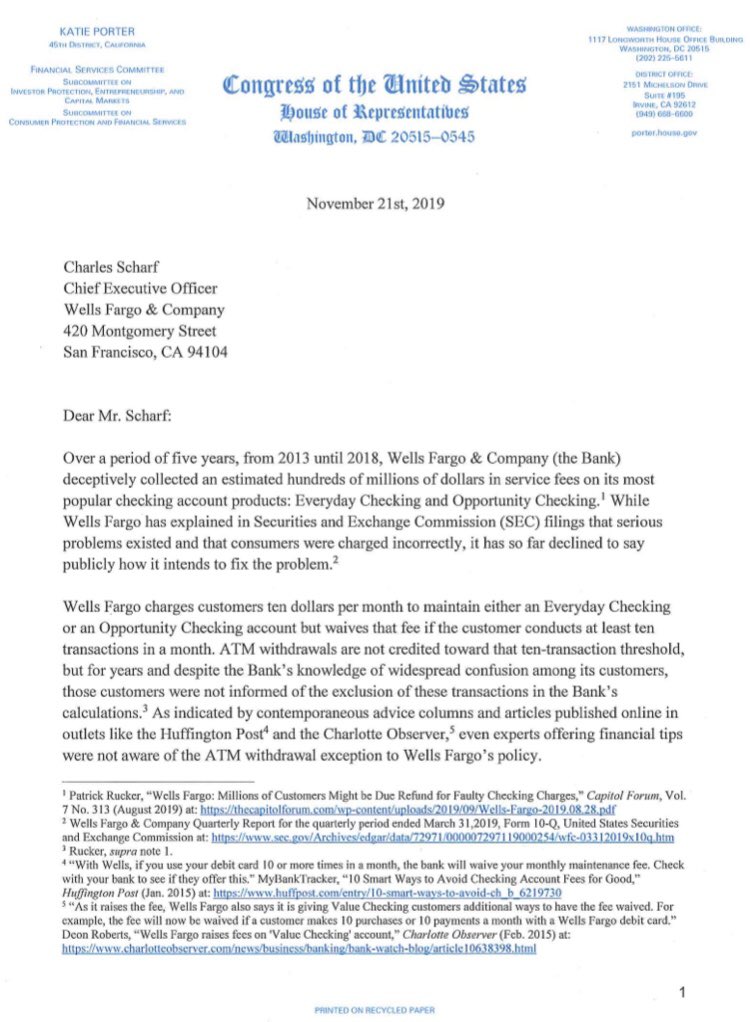 Porter asked for the bank to respond by Dec. 1 so customers can “be repaid in advance of the impending holiday season.”

In a tweet, Porter also said she’d reached out to federal bank watchdogs “to make sure the bank keeps its word” about refunding the money.

Wells Fargo customers with an Everyday Checking account can avoid the $10 monthly service fee by maintaining a $1,500 minimum daily balance, maintaining a direct deposit of $500 or more, making 10 or more debit card transactions, maintaining a linked Campus ATM or Campus Debit card or by being age 17-24.

But the bank said in its latest quarterly report that there may have been “confusion by some customers regarding the transactions that counted toward the waiver.” That may be because ATM withdrawals don’t count toward the 10 debit card transactions, but the bank relied on employees to verbally explain that to customers rather than writing it down, Capitol Forum reported.

In the filing, Wells Fargo said it was “reviewing certain past disclosures to customers.”

Walls Fargo has suffered from numerous gaffes in the past few years. In 2016, the bank paid hundreds of millions of dollars to settle with regulators over its phony account sales tactic scandal that saw the bank open more than 2 million accounts without customer authorization.

In 2018, the company came under fire over practices related to retirement plans, sales of add-on products and how it represented loan quality for mortgages it made before the 2008 financial crisis. At least a dozen Wells Fargo Securities employees were fired or suspended over allegations they doctored dinner receipts and improperly charged the bills to the company. And the bank admitted that November that hundreds of customers lost their homes after a calculation error denied them mortgage changes.

Earlier this year, a data center power issue caused major outages for Wells Fargo, affecting its app, website, credit cards and ATMs. In July, the company agreed to pay hundreds of millions of dollars to settle allegations that it signed up thousands of auto loan customers for car insurance without their consent, a practice which resulted in many of the vehicles being repossessed.

The bank called rebuilding trust after the scandals a “priority” in the recent SEC filing. The company’s board has been reviewing sales practices and a third-party consulting firm reviewed years of retail banking accounts to look for any issues.

“To the extent issues are identified, we will continue to assess any customer harm and provide remediation as appropriate,” the company said. “This effort to identify other instances in which customers may have experienced harm is ongoing, and it is possible that we may identify other areas of potential concern.”